6. The slowest learners:
They are given toys and learning items to develop their mental capabilities and gives regular exercise in the class.
7. Exceptional class:
Reading and writing are encouraged. A Polio victim girl is attending normal school and will be in V standard. After 3 years of therapy and encouragement, she can go anywhere by herself. Her poor parents in the backward remote area between Tibet and India never ever dreamt of attending normal school.

Moral service for World Peace
Cultural /Educational Exchange program:
World peace is the need of the present world. To achieve it, promotion of understanding between the nations and individuals is a must, and we serve this moral duty through Cultural and Educational Exchange programs with peoples of the world. We had teams of student and staff from various countries. During the interaction, staffs and students of both sides learn from each other.

Religious activities:
Besides everyday prayer, often special prayers were held for world peace and for the departed souls caused by the natural climatic disasters like in Burma, China, Taiwan and man made terrors like Bombings and violation of Human Rights e.g. in Mumbai and killings in Tibet by Chinese Government.

Environment awareness:
Nyingtob Ling is known for its greenery and clean surrounding, a source of joy and health for all. Planting trees, growing vegetables and flowers forms not only a part of training and exercise but future sustainability. We are relishing the Guava fruits and seasonal vegetables since few years.

Social Service:
a) Medical camps: Beside usual free clinic service to the Tibetans and Indians, free Medical camps were held with the Rotary Club, Inner Wheel, Sankalp etc. with team of doctors from India and Australia.
b) Massage: Our health worker and 4 students who learned massage gave twice service to the Old Aged Home in 2008-09.
c) Physiotherapy: With the joining of a Physiotherapist, we are planning for a day's service to the Old Aged Home and the needy outsiders around us twice a month.

Recreation:
Besides festivals or special occasions, we have picnic, camping, dancing events. Once, we have been to Tso-Padma (sacred lake) away from Dharamsala for seven days.
This Year's picnic was at near by river. Preparing food at the picnic spot and playing games and sports itself is a great enjoyment. Winners are presented with the prizes. The staffs and the students enjoyed very much at there.
On 10th December 2009 we celebrated the Nobel Peace Prize day. We had prayers for the long life of H.H. the 14th Dalai Lama and peace for all living beings. Then played games and presented the prizes for the winners. We had a great time.

THANK YOU INDIA
Nyingtob Ling celebrated its 10th Founding Anniversary, which coincides with the 50th year of Tibetans in Exile.
A Visited by the H.H: On 16th May'09, H.H. the XIV Dalai Lama blessed the staffs and the students by visiting the classrooms and giving speech at the prayer hall.
B Function: On 17th, we had function presided by the chief guest, the Cabinet Minister of the Religious & Cultural Department.
C Thank You India: We expressed our thanks and gratitude to the people and the government of India for giving us second home and supporting the struggle for the genuine cause of Tibet and mission of helping the special needy. To observe the event, Indian style lunch was served on the leaves to our Indian brothers and sisters along with our guests.
D Special Admission: Keeping in view of the speech by H.H. the Dalai Lama and the Cabinet Minister on these two special events, we have decided to take children above 20 and also less then 10 years along with some special cases.

Case History of some New Students:
Tenzin Gigtak, from Nepal, diabetic type II & hypertension under medication, mentally dependent and no one to look after him.
Tenzin Dolma, from a very poor family had normal birth but suffered mental problems with her age. Her father 81years and mother 77 Years old unable to take care of her. Zonga Monastery 's and Settlement Office requested and got admitted, now learning friendship bands and stitching.
Nawang Yanchen, mentally disorder from the birth. She belongs to very poor family. Her father did not look after her and mother is not with her since child. She has been kept under the care of her grandmother but then grandmother also was unable to care lately due to old age and poor so she was admitted here.
Tsering Choezom is from very poor background so her mother is not good enough to take care. She studied in Sambota School but due to attacked by T.B, in 8th standard, she could not concentrate on studies. In 1992 she learned handicraft almost for three years but her health degraded so she left that place. Then she went to Tibetan children village for vocational training on knitting. There also she cannot cope up with other student as her mental capability has become very weak. Finally she was admitted at Nyingtob ling.
Karma Yeshi, born in Tibet at Chungpo Dhingchen (Chamdo). Without acknowledge of his parent he left to India. He arrived in India in 2000. As he was monk from Tibet he was sent to Namdolling monastery at Bylakuppe for further studies. He did not have any closed relatives in India accept one nun. She could not help him too much as she is also a student which lead to stress and depression. His parents are not with him and no one is there to look after him when he had to face the problems. Gradually he himself disconnecting with socializing around him and preferred to be alone. That loneliness dragged him into a depression and complexity. He was not able to give exams due to hospitalized. His life turns out into depression disorder and eventually he has to withdraw from monastery. He was than admitted over here so that he becomes normal or more active.
Sonam Tsering was born normal in Tibet but when he was a baby, he fell down from the mother's hand leading to his head injury and made him mentally unfit. He was then sent to Nyingtob Ling for his bright future when his family came to exile in Nepal.

We have admitted one student, named Spalzes Angmo. 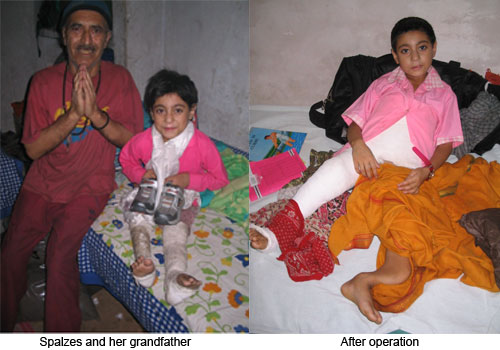 Her case study:
Name: Spalzes Angmo, born on 25/8/1998.
Place: Dah Hanu, Ladakh, Jummu & Kashmir
They are poor, 7 brothers and sisters and she is the youngest. She is taken care of her grandfather.
She was normal at the time of her birth till she reached 2 years old. She fell from the building and broke her leg. She was operated and was able to walk again till some kind of pain occurred and was not able to walk properly again. It got worse and now she is dragging herself with the help of her hands only. After more then thrice Mr. Franc and Mrs. Nawang Lhamo, Director, discussed how best could help this girl. Finally, admitting her at Nyingtob Ling could be the best for her future operation again at Delhi. Now, she is at Nyingtob Ling where she is being helped by the staffs and the students to adjust with the new surroundings.

All students are well cared and improving in their skills. The students are enjoying each other's company and Heartthrobs to see that every one is learning to help each other to walk towards class or for prayers, bathing and washing clothes.


*MAY HEALTH AND HAPPINESS PREVAIL ON EARTH*